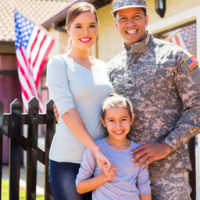 Serving in the military can sometimes mean that a person is unable to take care of some financial obligations, which could lead to foreclosure or other actions for repossession of collateral assets by lenders. In recognition of the extraordinary circumstances that military servicemembers face while they are on active duty that may under some circumstance interfere with their ability to meet financial obligations, Congress passed the Servicemembers Civil Relief Act.

Under the Servicemembers Civil Relief Act, lenders who loaned money to people who are serving in the military are not allowed to foreclose, repossess assets, or otherwise try to collect the balance of the loan amount while the servicemember is on active duty and for a period of time after the active duty is ended, unless the lender first seeks a court order. The law applies to loan obligations that were incurred before a servicemember went on active duty.

In addition to the requirement that the lender seeks a court order, the law caps the interest that can be charged to servicemembers taking out loans.

A servicemember facing foreclosure can use this law as a defense to stop the foreclosure, or contest a proposed foreclosure by filing first to stop the lender from taking any action to foreclose. It is possible for a servicemember to lose the advantage of the protections afforded under this law by waiting too long to take any action to contest a lender’s attempt to foreclose on his home or repossess his car. While relief may come if the Justice Department ever sues the lender, this is not guaranteed. It is therefore important for a servicemember facing foreclosure or repossession to speak to an experienced consumer protection attorney to discover if he has a valid defense against losing his property.

If you are a servicemember who lost your home or car while you were on active duty or shortly after returning home, you may have a claim against the lender. For more information about how an experienced consumer attorney can assist you, contact us at the law firm of Louis S. Schwartz, Attorneys at Law to speak to a Philadelphia foreclosure defense attorney.