Warning Signs Of Shady Dealing At The Used Car Dealership 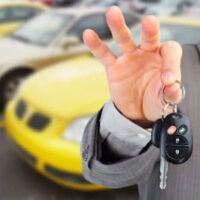 During times when people are already in the mood to celebrate by spending money on themselves, such as after surviving Thanksgiving with their in-laws and before it is time to start buying Christmas presents for children, used car dealerships like to put up the flashy decorations and lure people in.  Behind the twinkling lights and the free hot chocolate, though, these dealerships are often trying to sell you cars that the dealers know will soon start causing you trouble, even if they look shiny on the outside.  Likewise, even the cars that work perfectly fine are often on sale for much higher prices than their true value.  To solve the latter problem, you might simply need to ask lots of questions and put your negotiation skills to work before you buy.  To solve the former problem, especially if you have already bought the car, you may need the help of a Philadelphia used car fraud lawyer.

The price sticker on the windshield at a used car dealership often includes several numbers that add up to the total price.  One of these is MVA, which stands for “market value adjustment.”  It is simply an additional fee that the dealership tacks onto the price of the car to enrich itself.  Another acronym that the used car dealer is hoping you will not ask about is ADM, which stands for “adjusted dealer markup.”  Sometimes this markup is justified, such as if the previous owner added expensive accessories, such as a sunroof, tinted glass, or a fancy stereo system to the car after buying it; these add-ons would genuinely increase the value of the car.  Sometimes, though, used car dealers inflate the ADM or even charge one when there is no justifiable reason to do so.

Before you buy a car, you should always ask to see the Carfax report, which is the car’s transaction history, listing every time it has been bought or sold.  If the car does not have a Carfax report, you should run in the opposite direction.  If it has a Carfax report (which every car should have), you should read it carefully.  The report lists every time a person or entity purchased the car, as well as its mileage at the time of the sale.  If, at any point, the car’s mileage got lower, you should not buy it, because this means that someone turned back the odometer.  Likewise, you should not buy a car if an insurance company bought it after the driver totaled it, and then the insurance company sold it to a salvage company, which repaired it and resold it.

A used car fraud attorney can help you make informed decisions about buying used cars and about standing up for your rights if a used car dealership has defrauded you.  Contact Louis S. Schwartz at CONSUMERLAWPA.com to set up a free, confidential consultation.

By Consumer Law PA | Posted on April 12, 2022
« The Age Of Social Media Debt Collections Is Here
What To Do If You Get A Fraudulent Medical Bill »